When it comes to family activities, typically the more, the merrier is the rule of thumb.  Maybe you have a family of four, and the in-laws or cousins want to come along.  You’d rather not take two cars, so that’s where 7-passenger vehicles show their value.  But as you might be aware, all 7-passenger vehicles are not created equally.

Our test vehicle this time around is a 2014 Forest Mist Acura MDX all-wheel drive with Advance and Entertainment packages.  Now, just as its description fills your mouth, encompassed in these suites are loads of technology and safety features, bringing our tester’s total price to $57,400.00.

Under the hood is a 3.5L direct injected VTEC V6 engine that makes 290-hp and 267 lb-ft torque.  The engine is mated to a 6-speed automatic transmission with paddle shifters that powers all four wheels via Acura’s Super Handling All-Wheel Drive (SH-AWD).  Maximum towing capacity is 5000 lbs. on properly equipped all-wheel drive models.

Fuel economy is rated at 18 mpg city / 27 mpg highway, with a combined rating of 21 mpg.  AutoAcademics saw an average of 18.5 mpg during testing.

The 2014 MDX has some notable changes that were made to its exterior, when compared to the outgoing model. Its grille maintains a less pronounced aves-class design, yet more prominently displayed are the Jewel Eye LED headlights, which are reportedly whiter, brighter, more efficient, and longer lasting than HID or halogen headlights.

On the opposite end of the vehicle, the dual exhaust outlets from last year’s model have been tucked underneath of the rear valence and stylish reflectors trimmed in chrome now reside nearby at each corner.

Opening the power liftgate provides access to 14.8 cu-ft. of cargo space behind the 3rd row.  Fold that row down and you increase

usable space to 38.4 cu-ft.  With all of the rear seats stowed, 68.4 cu-ft. of maximum cargo space is available.  There is also extra cubby storage, and power points are present, too.

Inside, the layout is attractive, with soft plastics, woodgrain and real metal trim throughout.  The driver’s seat is 10-way power adjustable, 8-way for the front passenger, and both are covered in perforated leather with heating and cooling options.

Information is provided via dual screens in the center; with the lower having touch capabilities and the top providing other pertinent information, such as navigation, vehicle and entertainment functions.

In back, the rear seats are heated with integrated cupholders in the center armrests, and entry to the 3rd row is accessed via a push-button release.  While we were technically able to sit back there, we’d recommend limiting the 3rd row to smaller children if the drive is longer than a short commute.

While thinking about comfort levels in the rear-most passenger section, there are no air conditioning vents specifically for those seats.  The second row HVAC unit, however, was one of the best we’ve experienced and it blows cold air strong enough to eventually reach those passengers in the very back.

On the amusement side of things, the Entertainment package doesn’t just answer the age-old question “Are we there yet.”  It essentially eliminates it. Incorporated in the overhead console is a 16.2” widescreen dvd player with HDMI inputs, wireless headphone connections, and a 115V AC receptacle.  The screen can show wide-ratio movies or accommodate two separate video sources side-by-side.  Unfortunately, when in conjunction with a full-size booster seat, such features do affect rear visibility when driving, but I guess sometimes that’s a cross we all must bear.

On a positive note, the 2014 MDX is equipped with a 3 mode backup camera that shows various angles behind the vehicle.  The resolution is impressively clear both during the day and at night. 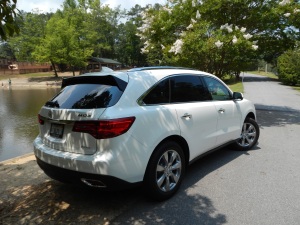 With the kids entertained, parents up front will be able to experience a sound possibly never before heard when travelling on a family vacation – the sound of quietness.  But this experience is not due solely to the first season of Sofia the First.

When you enter the cabin, you will notice the extra effort required to close the doors as they create a seal that no doubt aids in cabin isolation, blocking out most exterior noises.  This quietness extends itself, even while driving down the highway and this is an impressive feat considering the MDX’s standard 19” alloy wheel and all-weather tire configuration.

Driving the 2014 MDX was a pleasant affair and we feel as though that is where Acura (or Honda) focused much of its attention.

The suspension is just firm enough for this 4300 lbs. vehicle to exhibit good handling without wearing you out at the end of the day.

The V6 engine is smooth and barely audible inside the cabin, unless you request more of its 290 horsepower, at which point you will hear more of a growl from up front.  And if you are really in the sporting mood, you can change the Integrated Dynamics System (IDS) to “Sport” to increase steering feel and quicken throttle response.  And if that is not enough, engaging the transmission into “Sport” initiates even more aggressive behaviors, allowing for higher engine revs before the transmission shifts into the next gear.

Fortunately, with all of this newfound peace and enjoyment, Acura includes active safety technologies in its Advance package to help cover drivers who may accidentally slip into a Zen-like mode.  In conjunction with blind-spot alerts and backup sensors, Lane Keeping Assist System (LKAS) will alert drivers when they drift out of their lane and even help steer them back if their turn signal was not in use.  Collision Mitigation Braking System (CMBS) uses radar to identify the closing speed of an object, sounding an alarm while tightening the seatbelts and eventually fully braking if a frontal collision is imminent.  It’s nice to know that this driver-oriented crossover is ready to assist in case you forget you were driving.

There are a lot of viable 7-passenger vehicles on the market today.  Many, of which, are in the premium segment with the MDX.  But all are not created equal and the style, driving characteristics, and technology of the 2014 Acura MDX don’t make it any fairer.

View all posts by autoacademics