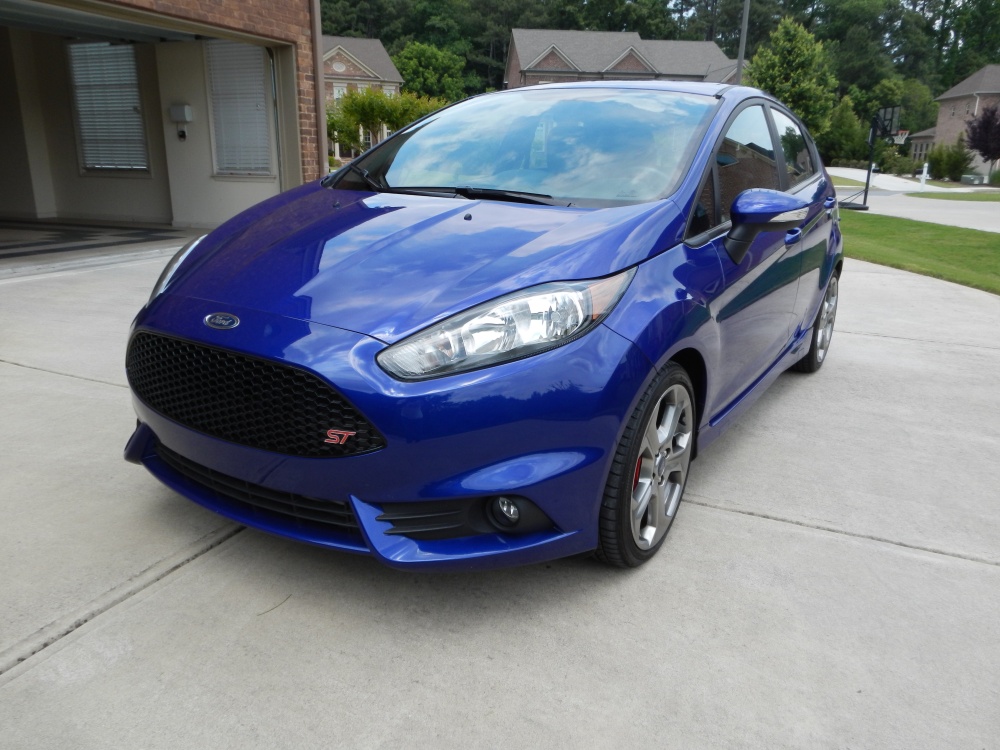 Onlookers must be careful not to mistake our Performance Blue 2014 Ford Fiesta ST tester for just any subcompact vehicle with red badging on it.  Cutting right to the chase, the 2014 Fiesta ST is as legit as they come.  Class-leading power, agile handling, and respectable fuel economy can all be checked off your list, as this car covers those and much more.  Dare we say it’s even kind of cool?

By comparison, the standard Fiesta is a fine car, ready and willing to assume commuter duty, day in and day out.  But the ST is capable of that and so much more.  And that’s what we aim to convey in this review.

For starters, under the hood is a 1.6L inline 4-cylinder engine that is similar in size to what is found in the standard Fiesta.  The powerplant in the ST, however, was blessed with Ford’s EcoBoost technology, where a direct injected, turbocharged and intercooled variant resides.  The engine makes 197-hp and 202 lb-ft torque and is mated to a standard 6-speed manual transmission (no automatic is offered) that powers the front wheels.  That’s 77-hp more than the standard 4-cylinder and 90

Now, those specs are a nice teaser, but we still need to share a little about what makes the Fiesta ST a practical daily driver.

Inside is pretty much standard fare, allowing pedestrian Fiesta owners to readily recognize the layout.  The instrumentation is large on the dash, and MyFord Touch with navigation is present.  However, there are some features that only the ST has.

Two of those features stood out during our testing.  First was the 6-speed manual transmission.  Stick shifts can play a number of roles in a sporty vehicle.  They can provide you total control over the transmission’s shift points.  They offer tactile feedback to the machine that you are piloting.  And they can make you (and the vehicle) feel really cool while driving, when implemented correctly.

The manual transmission on the Fiesta ST was easy to change from one gear to the next, with a direct, yet fairly effortless operation.  And clutch take-up was gradual and precise, with just enough weight to engage without stalling or over-revving the engine.  Overall, it made driving the Fiesta ST a lot of fun.

The other notable feature was the optional (and arguably mandatory, if you ask us) Recaro seats.  As you’d expect, they were very supportive, comfortable, and looked really cool in their black leather covering with light gray microfiber inserts, prominent

Note:  Those with keen linguistic talents no doubt have become aware of the numerous times we’ve used the adjective “cool” so far in this review.

As a practical side note, we feel it important to mention that although they aren’t officially branded, the rear seats are comfortable enough, and functional enough.

While driving, the Fiesta ST truly does make you feel cool, and that is a term that should not be thrown around loosely when talking about a sub-compact vehicle.  Practical?  Yes.  Efficient?  Exactly.  But, cool?  Well, if you don’t typically drive a sports anything (and my personal daddy mobile is a sports wagon), this car is pretty cool.

The suspension is rather firm, but this is a by-product of the great handling characteristics.  Though most front-wheel drive cars tend to understeer (keep going straight when you want to turn), the Fiesta ST goes where you tell it.  Part of this is likely due to the car’s light front end, and the rest would be its Torque Vectoring Control, which basically works like an electronic limited-slip differential, using the brakes to adjust the speed between the two front wheels, aiding in cornering capabilities.

One other highlight that we were not expecting to appreciate is the Engine Sound Symposer.  Although the name sounds like a button selection on a Casio keyboard, the feature actually transmits intake frequencies into the cabin, allowing you to hear more of the engine.  And it works great!  Modern cars are much more refined and quiet than in the past, so manufacturers must now artificially introduce engine sounds into the passenger compartment so that occupants can hear it.

One final cool attribute is the price.  A 2014 Ford Fiesta ST has a starting M.S.R.P. of $21,400 and ours with the optional ST Recaro package, moonroof, MyFord Touch with navigation, and 17” alloy wheels with red calipers stickered for around $23,000.  That is rather accessible to anyone shopping a performance vehicle.

So, to wrap things up, as well as in case you missed the message in our intro paragraph, we liked the 2014 Ford Fiesta….a lot.  And we believe that anyone who is shopping a performance-focused sub-compact vehicle should seriously consider it.  There are not many vehicles that offer legit performance in this class, but the Fiesta ST does.  Not to mention, it’s pretty cool, too!

Contact www.autoacademics.net for more info or to schedule a test drive near you.

Check out AutoAcademics’ video review of the 2014 Ford Fiesta ST below.

View all posts by autoacademics